In those 11 seasons Aggie Football finished outside of the Top 20 only once.  They finished in the Top 10 in five of those seasons.  They finished with 10 wins in six of those seasons in a period when only 11 games where the norm as opposed to the 12 games that are played now.  There were some 12 game seasons back then but the majority of those seasons were 11 game seasons so 10 wins is a big milestone.  There were three 9 win seasons and only one season of 8 wins and one season of 7 wins.  That’s pretty damn impressive from a win standpoint.  That’s a combined record of 104-27-2 for those 11 seasons for a winning percentage of .782.  That is an outstanding winning percentage over a decade.

Here’s a chart that summarizes each season: 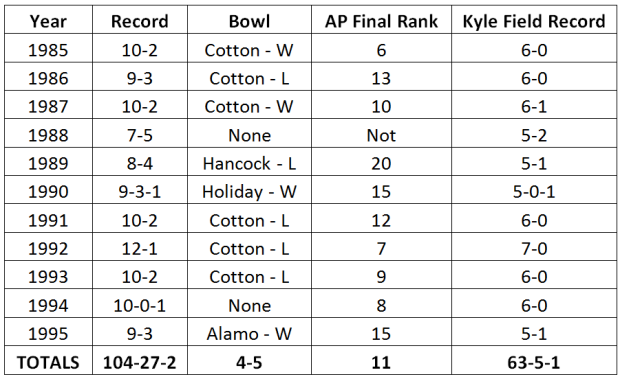 There’s a lot to digest but there’s no doubt that’s a decade of REALLY good football bordering on great.  Win one national championship in there and that’s absolutely a great decade of football.  There were legitimate chances to win it all in 1985, 1992, and 1994.

1985 was a lot like the 2012 season where they opened up with a tough loss to a ranked Alabama team on the road, lost to a ranked Baylor team in the middle of the season, and then got hot and just rolled everyone they played absolutely thrashing their final three opponents in TCU, Texas, and Auburn that included Heisman Trophy winner Bo Jackson in the Cotton Bowl.  Had they not lost one of those early season losses they might have had an outside chance to get Penn St to the Cotton Bowl instead of OU getting them in the Orange Bowl which is how OU won the national championship that year.  Early season losses set this team back just like in 2012.  There’s no doubt though at the end of the season this was one of the best teams in the country.

1992 was an undefeated regular season but like the modern day Big 12, Texas A&M was playing in a wretched Southwest Conference.  So wretched there wasn’t one team in the Southwest Conference that was ranked when they played.  A&M’s only win over a ranked opponent was to open the season against Stanford who was ranked 20th at the time.  At the same time both Alabama and Miami went undefeated beating more ranked opponents than A&M so Miami went to the Sugar Bowl instead of the Cotton Bowl.  Had Bama lost a game that season there’s an outside chance Miami and A&M would have matched up in the Cotton Bowl for the national championship but that’s still a stretch as Miami might have played Florida State in a re-match.  The Southwest Conference did A&M no favors that season because the teams were crap much like what top Big 12 teams face today.  Of course A&M losing to Notre Dame in the Cotton Bowl makes talk of a national championship that season moot but that was a damn good Notre Dame team.  However, A&M didn’t help itself for that game having to suspend Greg Hill for receiving improper benefits.  As it was A&M belonged in the conversation of Alabama, Miami, Florida State, and Notre Dame teams that were just loaded with talent.  That was a great team.  Probably the greatest of that decade for Aggie Football.

The 1994 team technically went undefeated but thanks to Greg Hill not going to his cush job for Warren Gilbert at a Dallas apartment complex they were on NCAA probation.  A&M was banned both from the post season and television that year.  A&M had no chance to win a national championship that season but if Greg Hill goes to his job or doesn’t take the money this potentially could have been a championship team.  The reality is this team wasn’t really all that close as even if they weren’t on probation and hadn’t tied SMU in one of the worst games I’ve ever witnessed as an Aggie fan, an undefeated Texas A&M likely wouldn’t have climbed over undefeated Nebraska and Penn St who had better regular season opponents and impressive bowl victories to remain undefeated.  Playing in the Southwest Conference was just not going to position a team for a National Championship unless a bunch of other teams lost in their better conferences.  That didn’t happen in 1994 but if A&M goes undefeated in 1992 and isn’t on probation it’s not a total stretch to think this team is playing for a national championship assuming they beat SMU that season.

While the Southwest Conference was pretty bad for the most part the statistic that stands out to me during that decade is the record at Kyle Field.  63-5-1 is just flat out amazing.  That’s partially where the mystique of Kyle Field came from in recent memory.  In 11 seasons Texas A&M only lost FIVE games at Kyle Field.  FIVE games in 11 seasons.  That’s unreal.  In 7 seasons Texas A&M never lost a game at home.  There was one tie which is kind of losing but it’s not a loss so we won’t count it that way.  Only one season did A&M lose 2 games and that was easily the worst team of that decade.  A&M never lost more than 1 game at Kyle in any other season and had a five year run where a fan at Kyle Field never saw a loss with just one tie.  That is flat out amazing at defending Kyle Field.  That my friends is absolutely great Aggie Football at home.  I don’t care how bad the Southwest Conference was as there were some big wins over non conference opponents and some solid Southwest Conference teams along the way.  Five losses in 11 seasons.  That’s amazing.

I won’t classify that entire decade as truly great because of the struggle in bowl games and key road losses but it’s not far from it and it’s what Aggie Football expectations should be.  With A&M’s resources there’s no reason why we can’t return to a decade of Aggie football like this and make it even better.  Make the right hire and we can get back there.

The most interesting part of this decade is a conversation I had with Dr. Loftin in 2010 after Nebraska and Colorado announced they were leaving for the Pac 12 and we had flirted with the SEC but didn’t pull the trigger.  This was prior to the Longhorn Network being announced.  Dr. Loftin told me the support for going to the SEC wasn’t as large as it seemed.  He said it was actually divided more to staying as there was a silent majority that was fearful of the SEC.  He told me he had basically divided support for the SEC between two major groups.  One was the recent graduates who were enamored with the SEC because of all the publicity it was getting at the time and the other was those Aggies that had graduated during this decade of Aggie Football and more specifically those that had been in school when Jackie was coach.  Those Aggies didn’t fear the SEC like those that didn’t attend school during that decade.

Dr. Loftin didn’t say this but there’s no doubt those Aggies during that period remember dominating football teams and most importantly dominating Kyle Field.  They weren’t scared at all of the SEC as they know Aggie football can compete at the highest level with the right coach.  This decade of Aggie Football should be the minimum standard of expectations going forward.  If those results aren’t being achieved then we need to be doing a serious study of what’s going wrong and what change is needed.  Shift the mindset that this decade is what Aggie Football should be.  We’re not there from a mental standpoint.  We really aren’t.

If you didn’t experience that decade as a student or fan you don’t know what you’re missing out on.  Kyle Field rocked every game and the biggest reason was the Wrecking Crew.  Defense was the staple of that decade and a coach needs to focus on bringing the Wrecking Crew mentality back.  It won’t be easy in this new era of high powered offenses but A&M needs a head coach that makes recruiting and preparing defensive players to thrash opponents a top priority.  Easier said than done but offense just wins games and the Wrecking Crew can win championships.  If a coach doesn’t understand the importance of bringing the Wrecking Crew back then we stand no chance of ever being great again.

There is no doubt with the right mindset a head coach can absolutely Make Aggie Football Great Again.  There’s a decade that says it’s possible.