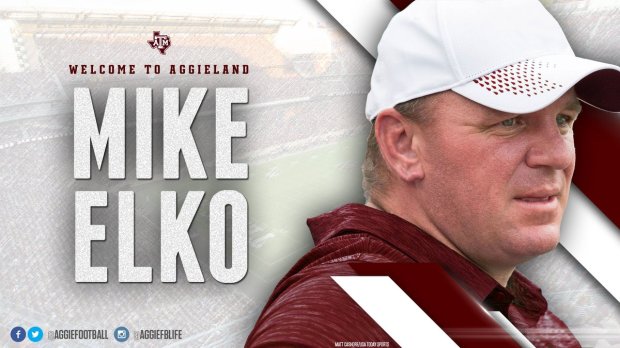 Before getting to the hire of Mike Elko let’s touch on the Belk Bowl.  It seemed like the perfect summary of the Kevin Sumlin era.  The Aggies jumped out to a convincing 14-0 lead thanks to two blocked punts deep in Wake Forest’s territory.  It seemed like it would be an easy win for Texas A&M with an early 14-0 lead and equally matched teams.  Wake Forest then rips off 31 UNANSWERED points in basically a quarter of football.  Seriously.  In around 15 minutes of football Wake Forest scored THIRTY ONE points and the Aggies scored ZERO.  On A&M’s first 6 possessions that didn’t involve a blocked punt they punted 5 times and fumbled on the 6th possession.  Meanwhile the Aggie defense is handing out points like candy on Halloween to let Wake Forest have a 31-14 lead.  The Aggies clawed back and went into halftime down 38-28 which is pretty remarkable.

The Aggies came out in the second half looking much better as the Aggie defense held Wake Forest to only a field goal in their first five possessions.  The defense forced two turnovers on five of those possessions and the offense continued moving the ball.  This allowed the Aggies to take a 45-41 lead early in the 4th quarter despite giving back one of those turnovers with an interception.  As would be typical of many Aggie games, the defense couldn’t hold as Wake Forest scored two touchdowns on their last two possessions.  The Aggie offense couldn’t respond to both scores and Wake Forest wound up with a 55-52 win.  It seems like the perfect ending to the Sumlin era where things looked great early on, then looked really bad, then clawed back making things look respectful by even taking the lead.  In the end the Aggies couldn’t hold on to a lead running out of time one final game with the Sumlin regime.

Someone asked me what I expected before the bowl game.  My response was that I didn’t expect anything different from the last four seasons other than Kevin Sumlin wouldn’t be on the sidelines chewing gum.  That’s the way it turned out.  The Belk Bowl was pretty much the mirror of Sumlin’s time at A&M.

Now we can truly begin the Jimbo Fisher Era.

Before bowl season there was a lot of speculation on who A&M might hire as it’s defensive coordinator.  Early on there was talk of Bud Foster, Alex Grinch, and Travaris Robinson.  They seemed like likely candidates given their current positions and A&M’s resources.  As bowl season cranked up the speculation started dying down as it seemed A&M wouldn’t be making a hire until after everyone played their bowl game.  During this time bigger names started getting whispered about with the biggest name being Dave Aranda of LSU.  It seemed like a long shot but the rumors got stronger and stronger that he was Jimbo’s main target.  Along with the way names like Manny Diaz of Miami, Mike Elko of Notre Dame, and Don Brown of Michigan were also speculated.

It was very much like the Jimbo Fisher hire where nobody knew for sure but there seemed to be a clear target and it was Aranda.  After the New Year’s Day games the smoke around Aranda really started to thicken.  Of all the names being speculated Aranda’s name seemed to be the most consistent.  There was speculation on the LSU side that it was pretty apparent A&M was coming after him.  At one point it sounded like he might have turned A&M down but nobody knew for sure.  Brent Zwerneman then tweeted A&M was in fact going after Aranda and a pretty wild afternoon/evening ensued with no one publicly knowing what was going on.  It was clear though that A&M had in fact zeroed in on Aranda.  Later that evening it became pretty clear that Aranda was not going to leave LSU.  It appeared LSU had given Aranda the exclusive keys to the LSU defense and a new contract for four years worth $10 million in total compensation.  Hard for Aranda to turn that down.

Aggies everywhere seemed pretty dejected Jimbo didn’t land Aranda.  They lamented all the momentum A&M had built with the Jimbo hire was gone.  The Aggies would be stuck with some average defensive coordinator that even his current school didn’t want.  A lot of Aggies went back to their “woe is us” mentality as it seemed like Aranda or bust.

Fortunately for A&M Jimbo Fisher didn’t see it that way.  Less than 24 hours after being publicly turned down by Aranda the Aggies hired Mike Elko away from Notre Dame.  It was a major get by A&M to hire an up and coming defensive coordinator away from a major program.  The momentum A&M created by hiring Jimbo seemed to be back.  All was good in Aggieland for football.

While Jimbo didn’t land his top target in Aranda I love the way this hire played out.  It was clear Jimbo had his top target and A&M threw everything they could at him.  When he didn’t bite A&M didn’t get phased and simply went after the next major hire they had on their list.  In less than 24 hours they had their defensive coordinator.  Nobody likes getting rejected but rejection is a lot easier to swallow when you immediately rebound with something just as good.  That’s what A&M did and shows this is a different day for A&M football.  There seems to be a plan with targeting, approaching, and hiring the football staff.  It certainly feels different.

As for Elko it seems like a really solid hire.  I’ll admit I haven’t watched a lot of Notre Dame football this year but it’s pretty clear the biggest difference from Notre Dame in 2016 to 2017 is the improvement of their defense.  Notre Dame went from 4-8 to 9-3.  That’s pretty remarkable.  What I’ve read and watched about him he seems like a guy that coaches fundamentals and adapts each week to the offense his defense is facing.  I don’t think fundamentals and adaptability are understood enough by coaches.  It seems at times a lot of coaches want to out scheme everyone but if you don’t have fundamentals and adapt each week there is no “schematic advantage” as Charlie Weiss likes to say.  Elko seems like a guy that focuses on fundamentals and changing his approach each week based on the opponent.  The one common comparison that can be made is Notre Dame held LSU to 17 points in their bowl game while A&M allowed LSU 45 points this past season.  I would bet the talent level on the Notre Dame and Aggie defense isn’t far apart so that’s a feather in Elko’s hat.

The thing I like most about this hire is Jimbo Fisher appears to be doing his due diligence and hiring competent people he doesn’t have a relationship with.  I think the worst thing a head coach can do is only hire people they’re familiar with rather than look for the most competent person no matter their relationship.  It appears Fisher targeted people he has no relationship with but through due diligence identified people he thinks are great coaches at their respective positions.  I absolutely love that because it seemed Kevin Sumlin only hired people he had a prior relationship with.  The only time he hired someone he didn’t have a relationship with was Dave Christensen and that was a disaster.  I don’t think that’s happening with Fisher as he seems to be targeting coaches on their way up instead of their way down when Sumlin hired Christensen.

For those disappointed by the failure to get Aranda there’s no reason to be concerned.  I think Elko is likely just as good as Aranda.  I think a lot of coordinators get over-rated based on the school they coach because of their talent.  I think in college football there’s a group of 10-15 coordinators that are all interchangeable.  For the most part they’re excellent coaches but none of them are perfect and they have bad games.  There’s no coordinator that’s head and shoulders above anyone else.  Even Aranda who’s deemed as one of the best defensive coordinators in college football had games this past season where they gave up 37 to Mississippi State, 26 to Syracuse, 24 to Troy, 24 to Ole Miss, and 24 to Bama.  That’s 5 of 12 games where his defense gave up over 20 points.  That’s certainly not dominating by any stretch.

We’ll find out in 2018 how good Elko is as he has some decent components to work with on the Aggie defense.  I think Elko has a much easier job than Jimbo Fisher on the offensive side of the ball.  I think there’s more talent across the board on the defense compared to the offense mainly because the offensive line is so bad.  There’s no reason to think that Elko can’t improve on what John Chavis did as defensive coordinator.  It won’t be a major improvement but the goal should be a more consistent defensive effort from game to game.  Based on Elko’s history as a defensive coordinator there’s no reason to think he can’t do that.  It won’t be the true return of the Wrecking Crew but those days are likely never coming back.  Football has changed to an offensive game for the most part.  What the Aggies need is a defensive coordinator that preaches fundamentals and adapts to the opponent each week.  In Elko it seems that Fisher has found someone that can do exactly that.