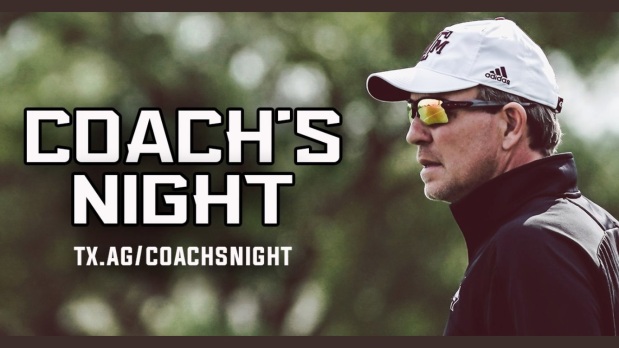 Nobody knows the eventual outcome of Jimbo Fisher’s tenure at Texas A&M.  He may never win the SEC West or he may win multiple national titles.  Only time will tell.  The telling thing will be how much he wins and loses.  It’s the only thing that matters in sports.  Sure, you want to win with integrity but at the end of the day the only thing fans really care about is wins and losses.  Jimbo’s tenure will be judged on wins and losses.  This much we know.

When Jimbo was hired I said if he doesn’t win big we might as well shut the Aggie Football program down.  I feel no different after seeing him at the Houston A&M Club Coach’s Night.  For 45 minutes Jimbo talked football and Aggieland at a pace that made the auctioneer on stage before him seem like he was talking slow.  This was after flying back from Atlanta where he spent all day talking at SEC Media Days.  Sure, he flew on a private jet so it wasn’t like he was fatigued from travel but regardless the man rattled off things about his team and Texas A&M at a pace and length most people in the audience couldn’t keep up with.  They became dis-interested not because what he said was boring but because their brain couldn’t keep up with Jimbo’s words.  Seriously.  Some people at my table gave up trying to follow along with what he was saying.  It got me excited.  You needed your brain’s full capacity to catch every word Jimbo was saying.

It’s clear Texas A&M finally has a legitimate football coach again.  It’s been since around 1995 that we’ve been in this situation.  The last legitimate football coach we had was R.C. Slocum before Mack Brown, Nick Saban, and Bob Stoops arrived on the scene and R.C. lost his way.  I’ll get to that in more detail in a bit.  I finally feel confident we have a coach with no question marks when it comes to being a college head football coach.

I won’t get into the details of what he said as it’s the same thing he’s said repeatedly in other press conferences but it’s crystal clear Jimbo Fisher knows and loves coaching football.  Jimbo carried a small piece of paper to the podium with a few notes but for 45 minutes he spoke completely from his brain.  His brain is filled with football knowledge.  Players, schemes, technique, coaches, and motivation he covered it all.  He knows football is a complex sport that combines all those things.  His brain is constantly thinking about all those things combined.  He’s very focused and he’s very driven.  That much is clear.  He wasn’t up there speaking to speak.  He was speaking about his knowledge and his expectations.  He constantly thinks and works to win football games.  He understands it’s not just plays and players that matters.  It’s every drill about technique in practice that matters.  It’s about his staff.  It starts with a bunch of individual things that must be combined to work in unison.  He knows he’s the leader and it starts with him.  He’s going to set the example for work and knowledge.

In addition to his football knowledge he’s quickly learned his A&M knowledge.  It was impressive the things he’s already realized about Aggieland.  He’s not learning about Aggieland to just speak about it.  He’s doing it because he’s figuring it out how it will help him win football games.  He’s using it to help recruit and he’s doing it to garner support from Aggies all over.  It is good though that Jimbo does seem to get Aggieland.  It’s a special place and he truly seems to understand that now more than ever.  Understanding Aggieland will only help him win games.  Plus, if he does win it all he’ll sell the school as much as the football program.  He’s going to take that next step we’ve yet to realize since joining the SEC.

I’ve never spoken with Jimbo personally but I don’t think he’d be any different than what you see on stage and in interviews.  He’s real and he’s raw.  He speaks from the brain more than the heart.  He’s not covering up any deficiencies.  Having helped put on Coach’s Nights in Houston and Fort Worth I’ve been able to be around every head coach since Jackie Sherrill.  Jimbo seems different than all of them.

Jackie is by far the most personable of all of them.  He knows football but Jackie is a natural salesman.  There’s no doubt why Jackie recruited like he did.  Make the paying the players joke if you want but it was the nature of the beast at the time.  Jackie could recruit for a reason beyond what was going on at the time.  He’s extremely personable.

R.C. Slocum is a fine person but he was stubborn as a coach.  He didn’t want to adapt to how football was changing and what other schools were doing.  Both on the field and in recruiting.  He thought showing up as R.C. Slocum wearing Aggie gear would be enough.  He won a lot but it wasn’t enough.  R.C. was a great coach when he took over from Jackie but he couldn’t sustain it.  Mack Brown, Bob Stoops, and Nick Saban exposed his deficiencies as a coach in my mind.  He’s a fine person but he was put in an outstanding situation and didn’t adapt to keep it going long term.

Dennis Franchione was an arrogant punk.  He felt he was better and smarter than everyone else.  He didn’t like being bothered by regular people.  He was a fraud as a coach as he rode some good luck with Gary Patterson and Ladinian Tomlinson at TCU.  He then inherited a loaded Alabama team before he headed to Texas A&M.  He had his work cut out for him at A&M but he was in over his head.  He masked it with arrogance until he couldn’t win enough.

Mike Sherman is as fine of a person as you’ll meet but he has no charisma and the big picture is not his strength.  He’s a very intelligent man at certain things.  Mainly offensive play calling.  He makes for an outstanding Executive Vice President but he’s not cut out to be a Chief Executive Officer.  His hiring as Head Coach at Texas A&M is still the most confusing thing I’ve ever seen.  I never got it then and I still to this day don’t get it.

Kevin Sumlin just wants to be a celebrity.  He doesn’t want to work because he’s not all that smart.  He caught lightening in a bottle with that 2012 team (and Case Keenum at UH) but the reality he’s not interested in being a great football coach.  He wants to give rah rah speeches and never look at film or work drills with a player.  He’s a great public speaker and a funny guy but he’s horrible as a head coach.  He’s made for a television headset and not a coach’s headset.

Jimbo seems different than all of them.  He has the raw mental horsepower to understand complexities and not be overwhelmed.  He has the curiosity to learn from others and change for the better.  He’s funny and charming enough that he can sell recruits.  He has the work ethic to set the example if you’re not willing to work for it you’ll never achieve it.  He seems humble enough that when assembling a staff he wants people to challenge him and not just compliment him.  He’s the leader but he wants independent thinkers offering feedback.  While he clearly knows a lot and likely knows more than any one person in the room he knows he doesn’t know it all.  Others can still offer him knowledge.

Jimbo referenced Scott Woodward several times last night.  It’s clear Jimbo wasn’t completely sure what he was getting into at Texas A&M and it wasn’t just about money.  He came to Texas A&M because of one person.  Jimbo believed that person when he was told he’d have more resources to win a National Championship than at Florida State.  That person is Scott Woodward.  Let’s never forget what Woodward means for the Jimbo hire.  He’s the man that made it happen.

I loved the Jimbo Fisher hire from the first day.  I didn’t have any reservations about him like I did with Fran, Sherman, and Sumlin.  From what I’ve seen from Jimbo since that day nothing has changed.  Seeing him speak in person I haven’t had faith in the Aggie Football program like this since the early 90s.

Maybe Jimbo never wins that National Championship.  Something tells me he will.  He’s done it once at Florida State and I think the timing is right for him to do it at Texas A&M.  I don’t think Tom Herman will be super successful at Texas so our main in state competitor for talent is susceptible.  I think in the next 2-3 years Nick Saban will step down as Bama coach.  I think LSU will wander aimlessly for a spell like before Saban got there.  I think Georgia and Florida are poised to rise in the East which hill hurt Auburn for recruiting.  You have to win the SEC West before worrying about a National Championship and it could get easier for A&M to do so.

I think everything is lining up for Jimbo to have one hellacious decade at Texas A&M.  It won’t happen this year as our offensive line is too weak.  I think by the third year Jimbo is going to have Texas A&M poised for a run at the National Championship.  I really do.  I don’t feel like I’m drinking the maroon Kool-Aid.  I really feel I’m looking at it objectively.  A part of success takes timing.  I think the timing is finally lining up for Texas A&M.  It’s about damn time.

If you want a funny and sarcastic tribute to Jimbo Fisher just press play:

If you want a Make Aggie Football Great Again hat click this link for contact info.  They’re $20 including shipping: