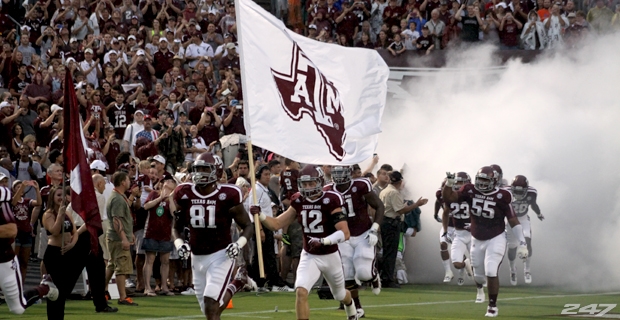 As we enter the 2016 Aggie football season there’s lots of questions if Kevin Sumlin is on the hot seat.  There is no correct answer at the current moment.  The reality is the heat of Sumlin’s seat is controlled SOLELY by him and will be decided this season.  If the Aggies win 9 game this season there is no heat.  If he wins 7 games then he’s gone and if he wins 8 games it’ll depend on the number of home games he wins.  More than likely the LSU game will be the most important.  If he loses to Bama, UCLA, Tennessee, and LSU I don’t see how he can survive that but it’s still possible.  As long as Sumlin doesn’t get to 4 losses there’s not an ounce of heat but once he hits 4 games then that seat will be hot.  It’ll all because of his head coaching ability and nothing else.  I’ll do a season prediction as we get closer to the season but this is my analysis of Sumlin and where he stands right now.

Coming into his fifth season at A&M it’s crystal clear what kind of coach Kevin Sumlin is.  He’s a CEO coach that’s not going to grind things out.  He’s hands off when it comes to the decisions his staff makes for in game preparation and even in game.  I have a ton of specific examples but I won’t bore you with them.  Buy me a beer and I’ll tell you in great detail.  Kevin Sumlin is in the style of coaches like Les Miles, Mack Brown, and Bobby Bowden.  They clap a lot and hope to give great speeches but if you ask them exactly what’s going on during the game he’s just watching like me and you.  You better hope he can hire a great staff and recruit because he’s not going to have much effect on the actual games himself.  That’s not a bad thing but it’s not a great thing either.  It’s possible Sumlin can win a National Championship but he’s only as good as his staff and recruiting momentum.  I’d actually be fine if he turned into Miles, Brown, and especially Bowden as all of those guys have a National Title to their name and I want that feeling just once before I die.  Just once.

He’s not in the class of coaches like Nick Saban, Urban Meyer, and Gary Patterson who are guys that flat out grind it out during the season making decisions that influence his coaching staff in weekly preparation and in game decisions.  I think Jim Harbaugh will join this group as well but let’s give him one more year at Michigan to make sure.  I also think Tom Herman will join this class one day but let’s also give him one more year and see where he goes next.  If Sumlin falters and Herman has another great season at UH I’d love to see Herman in maroon but let’s not worry about that right now.

Sumlin will never join that list of elite names because it’s not who he is.  He’s not interested in the details of the day to day grind for game planning and in game coaching.  He wants to be popular and celebrate leaving it up to those below him to make things happen.  That’s not necessarily a bad thing but if he doesn’t hire right or loses recruiting momentum then he’s toast because he doesn’t have the ability to directly reverse course by himself.

Sumlin got to this whole make or break season because of hiring decisions he made.  When Kingsbury left he promoted someone with no experience calling plays in Clarence McKinney.  When McKinney didn’t work out he repeated the process in hiring Jake Spavital.  Don’t even get me started on Jake Spavital.  When year 1 of Jake Spavital didn’t work out Sumlin fired his offensive line coach and brought in Dave Christensen.  That went even worse as Christensen was a HORRIBLE offensive line coach and Spavital was his usual horrible self.  A decision made by Sumlin made things WORSE.  So in the 3 years post Kingsbury Sumlin just TOTALLY botched his offensive staff.  I mean just TOTALLY botched it.  He made $5 million a year to make these stupid decisions.  $5 million a year and he’s hiring inexperienced offensive coordinators.  That’s on him.

While Sumlin was promoting Boy Wonder Jake Spavital, Nick Saban lost two games in a row to go 11-2 in 2013 and sent his offensive coordinator away.  Seriously.  He told his OC in an 11-2 season to get lost.  He then hired Lane Kiffin as his OC and won the SEC two years in a row including a National Championship.  He had no real relationship with Kiffin but remembered how tough it was to coach against his offenses despite the reputation of Kiffin at the time.  See the differences in how these coaches operate?  Saban isn’t about relationships.  He’s about results on the field because he knows if he wins everything takes care of itself.  Saban is focused on the field.  Sumlin is focused on the lights off the field.

On the defensive side of the ball Sumlin held on to Mark Snyder one year too long. He probably shouldn’t have hired Snyder in the first place but Snyder wasn’t really as bad as Aggies fans made him out to be.  Snyder was an above average coach but when paired with Sumlin’s below average OC hires after Kingsbury it made him look that much worse.  Snyder was a tremendous DC his first year getting the most out of a lot of guys that weren’t the most talented but had a ton of heart.  Snyder deserves credit for that 2012 defense but when the guys with heart left then Snyder was hosed.  He made some HORRIBLE personnel decisions two years ago and I really feel Sumlin should have stepped in and guided him.  I won’t name player names but there’s a certain position in the middle of the field that clearly wasn’t able to perform in the position but he kept getting run out there until it was painfully obvious.  Sumlin then had to pull the old “every position will be evaluated” technique in the middle of the season.  A great coach NEVER says that because they anticipate that coming before it gets there and makes adjustments.  $5 million a year to make those decisions when it’s painfully obvious what’s going on.  FIVE MILLION AMERICAN DOLLARS and midway through the season we have to re-evaluate everything because we’re getting our ass kicked.  $5 million to reshuffle the cards.

As much as I’d love to see Tom Herman in maroon because I do think he’s going to join the likes of Saban and Meyer I REALLY want to see Sumlin win 9 games or more this year and keep his job.  I absolutely LOVE the current staff he has for a guy like Kevin Sumlin.  I mean LOVE.  I’ll take John Chavis over any defensive coordinator in the country.  Hands down without a doubt.  That dude is a grinder.

I know Aggie fans felt we gave up too many yards on the ground last season but the reality is our defense played well enough to win EVERY game last year.  I’m not kidding.  Even against Alabama we held them to 20 points on offense.  They didn’t score a touchdown beyond 5 minutes in the second quarter.  Derrick Henry gashed us for 20 minutes but Chavis made adjustments and kept him contained.  Chavis’ in game adjustments were just remarkable all season.  Go back and watch the games and while we did give up some big runs on occasion for the most part our defense stopped opposing offenses when it mattered.  Boy Wonder Spavital just couldn’t get his stuff together to respond when the defense gave the offense an opportunity to win the game.  I don’t put that on Chavis.  I hate Jake Spavital.  Seriously.  What a failure.

The Wrecking Crew is never coming back.  Football has evolved where offenses are going to score points.  Even Nick Saban has learned this which is why he’s adapted.  If you think we can field a defense that holds quality opponents under 300 yards and 14 points you’re fooling yourself.  It ain’t happening anymore.  John Chavis coaches a defense that attacks and adjusts to make stops when it counts.  That’s all you can ask for and he’s better than anyone in the college game in my mind.  Most importantly he’s not going anywhere.  As long as Sumlin is coaching A&M so is Chavis as long as we keep paying him.  I don’t want to lose that so I want Sumlin to succeed this season.  Think Gary Kubiak and Wade Phillips.

Offensively it took 3 years but Sumlin seems to have finally gotten it right.  We’ll have to see how this season goes for Noel Mazzone but I like his experience.  If we win 9 games that tells me he’s a solid enough offensive coordinator to compete at an elite level year in and year out.  Even more than Mazzone I absolutely LOVE the hire of Jim Turner.  This guy is a flat out grinder when it comes to the offensive line.  He consumes himself when it comes to the offensive line in recruiting, technique, and motivation.  It’s no surprise what’s happened to our Oline recruiting since he got hired.  I think he’s the best offensive line coach in the country.  He loves Aggieland and likely never leaves if he has anything to do with it.  Offensive success begins and ends on the offensive line and I love having Turner handling that component of our offense.  He and Mazzone should combine to be a really good offensive tandem.

More than likely this will be Mazzone and Turner’s toughest year on offense.  Our QB is unproven and our offensive line has some holes.  Yes, Trevor Knight is unproven.  If Mazzone and Turner can get 9 wins or more things get easier next season as Turner adds talent and depth on the offensive line.  QB will once again be in question next year but year 2 with an offensive coordinator and better line makes things a lot easier to manage.  And just like Chavis, Mazzone and Turner are lifers at their positions so they’re not going anywhere as long as Sumlin is successful and we keep paying them.

I’d love to see nothing more than a band of Sumlin on vocals, Chavis on lead guitar, Mazzone on bass, and Turner banging the drums rocking Aggieland for years.  It’s very possible but it’s going to take 9 wins to do it or 8 wins with major wins at Kyle to keep these guys around.  7 wins or less and some of them are going to have to find a new band to get gigs.  They won’t be booked in Aggieland next season.

If Sumlin only wins 7 games then buy him out and head down Highway 6 to 290 and get Tom Herman and be done.  If Sumlin isn’t the answer then I’d love to see Herman, Chavis, and Turner rocking in a new band in Aggieland.  If not Herman then I’d be fine with Chad Morris to rock out with Chavis and Turner.  All I know is for the first time in 4 years Sumlin has a staff he can win with and I want him to.  If he can’t croon some chart toppers this year it won’t be because of the guys behind him.  It’ll all be on his high dollar vocals not making it and he’ll never figure it out.

So who controls the heat on Sumlin’s seat?  He does!  He does!