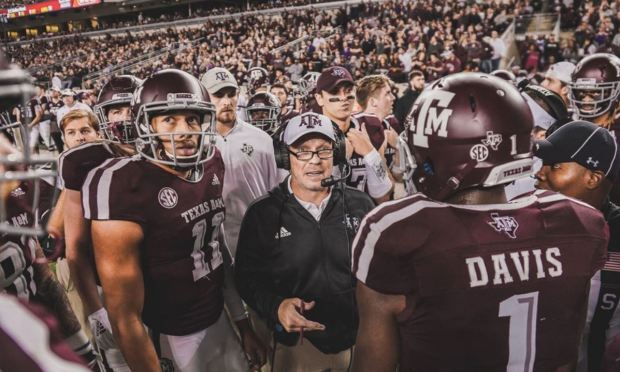 The Houston A&M Club had their Coach’s Night on July 19th.  A little earlier than normal.  I meant to get these out sooner so my apologies for taking a couple of weeks.  At the event the same things were covered as if it were in July so the earlier date didn’t really change the information.

Don’t get me wrong, there was plenty of generic talk in what Jimbo said.  50 to 60 percent of what Jimbo said is really no different than what any other coach would say.  Most of that centered around being excited for the season, players working hard this summer, and going through the roster of individual players.  Every coach builds up his players and for good reason.

This is a great event that raises a ton of money for Aggie scholarships.  If you ever get the chance to go then don’t hesitate.  You’ll get pumped up for Aggie football and raise money for deserving Aggie students.  It’s a win-win situation.

There are a few things that Jimbo did cover differently in the past that stuck out to me:

Every Aggie knows about the 2019 football schedule.  It’s as difficult as it gets.  You know the opponents and the locations.  What I thought was interesting about Jimbo was he never set it up for a lack of wins.  I remember Fran, Sherman, and Sumlin referencing their schedule and setting it up as an excuse for fewer wins than expected.  Their statement was always something like, “With this schedule our record won’t reflect how good our team really is.”  That always struck me as weird they were counting wins and losses before the season ever started.  That told me they didn’t think their team was as good as it should be.

Related to the 2019 schedule Jimbo said, “I can’t really worry about our record right now.  All I can worry about is my process for coaching.  The wins and losses will take care of themselves.”  Jimbo did say he welcomed the challenge of this year’s schedule as it would be good for his team long term.  He knows it’s tough but he wasn’t making excuses for anything.

Based on his comments I think he sees this season as a building year.  To him it’s not a re-building year despite key starters lost at key positions.  He plans on taking another step from a 9-4 season with an impressive bowl win.  Jimbo knows he’s got a young but talented team playing the toughest schedule in the country.  He could make excuses in advance about not winning more games this season.  He didn’t.  He never referenced reducing the expectations of wins based on scheduled opponents.  He’ll let the season play out and go from there.

He did say one funny thing about the schedule.  As part of a fundraising activity before Jimbo spoke the phrases, “Beat the hell outta Clemson, beat the hell outta Bama, and beat the hell outta Georgia” were said in the room.  Towards the end of his speech when talking about the schedule Jimbo said, “Earlier y’all said we hoped we beat Clemson, Bama, and Georgia.  So if we win those games and go 3-9 then everyone is going to be happy?  Yeah.  I didn’t think so.  We know we have to win a lot more than those three games so that’s what we plan on doing.”

Ultimately any season is judged with wins and losses.  I don’t think he plans on making excuses for our schedule.  He has standards for himself and the team.  They’re likely higher than most fans.  We’ll just have to wait and see the final record but it’s clear Jimbo isn’t worried about it.  He’s worried about coaching football.

I think the one thing that gets overlooked in Nick Saban’s coaching is his ability to develop players.  Saban recruits well but he knows if he doesn’t develop those guys then it’s wasted effort.  That’s why Saban never has a down year talent wise.  It’s not just having the best recruiting class year after year.  It’s about developing those guys year after year.  Ask Les Miles and Mack Brown about recruiting the best guys every year and not having much to show for it.

I think Jimbo understands player development is a crucial component to winning football games.  Jimbo made the comment, “We can have all the talent in the world.  If we don’t develop it into football players then we we’re not going to win as many games as we should.  It’s on the coaching staff year-round to make sure these guys are always developing as football players.”

He talked about recruiting the right guys with the mentality to want to work and play football.  There’s lots of guys that are athletic and good at football.  However, if they don’t like working or really like playing football they’re not the kind of player Jimbo is looking for.  Based on what I’ve heard Jimbo say I think there’s merit to it.  Jimbo loves “coaching ball” so he’s looking for guys that love playing football and want to work at it.

I’ve read Nick Saban won’t offer anyone that he hasn’t worked out in person because he wants to see how they handle criticism and coaching.  Jimbo sounds like he’s in a similar situation where he loves working high school guys to see if they can be coached.  Playing football isn’t just about stars and measurables.  It’s about wanting to learn and play the game.  I think Jimbo understands that.

Jimbo said one other interesting thing related to player development.  He said that when he sees a great play in practice or a game he likes to ask that player what they did.  If they can’t tell him what they did then it was just luck and they might not be able to repeat it.  Jimbo said coaching isn’t just about correcting mistakes but it’s driving home what someone did right.  His point is if you understand what you did on a great play then you can do it again.  If you don’t understand what you did then it was just luck and replicating it is in question.  I thought that was very insightful into developing players.

Jimbo did say a couple of interesting things about Mond.  He re-iterated how Ole Miss was the turning point in Kellen’s season.  He commented about how Kellen responded after turning the ball over where Ole Miss returned it for a touchdown to go up 21-14.  He said everyone in the stadium was doubting Kellen including his head coach but Kellen responded and he felt he played his best football after that game.  He pointed to the LSU and bowl game as examples of how Kellen developed from that play.

Kellen is not without fault in the LSU and Gator Bowl games but Jimbo did feel that his response to that mistake in the Ole Miss game was a turning point.  This is a team game but there’s no doubt in my mind the 2017 Aggies would have lost to Ole Miss after that turnover and would have likely lost to LSU and the bowl game.  You can debate how much of the wins over LSU and NC State where Jimbo and the team.  There’s no doubt that Kellen Mond deserves credit for responding after a really bad play.

Jimbo pointed to one play specifically about how Kellen responded after that Ole Miss play.  That was the final play in regulations against LSU.  Jimbo said they were on the sideline while the knee down play was under review.  They were confident there would be one more play.  He said he offered two plays to Kellen to score and asked which play he wanted.  He said Kellen picked his play and Jimbo said, “That’s the one I would have picked so let’s do it.”  That might be a coach building up his quarterback to the fans.  I don’t think Jimbo would have told that story if he didn’t have a ton of confidence in Mond.  Jimbo then went on to say passing to Quartney Davis to tie the LSU game was Kellen’s second read.  He understood the play design and read the defense.  Kellen picked the right play and executed it in a pressure packed situation.

I know that won’t mean much to you folks that don’t like Kellen. To me though it does show that Kellen can make football decisions in pressure packed situations.  At least according to Jimbo.  At this point I’m going to take Jimbo at his word.

I have no clue what that means for 2019 Kellen Mond but I do believe there’s lots of positives heading into the season.  Jimbo feels the same.  We’ll find out if it’s coachspeak or not.  2019 will be a big year for Kellen Mond.

July 1st is upon us so the 2019 Aggie football season is getting closer and closer.  Over the coming weeks I’ll write up my expectations for the position groupings in the 2019 season.  After that I’ll do a game by game breakdown.  2019 will be the key season to find out if Jimbo can in fact Make Aggie Football Great Again.

If you’re reading this blog for the first time and want to get notice when new blogs are posted you can follow us on Twitter and Facebook by using the following two links:

If you want a Make Aggie Football Great Again hat we have some in stock.  They’re $20 including shipping.  You, your friends, and your family will look great in one as we get ready for the 2019 Aggie Football season!  You can email chewyredding at yahoo dot com for more information.  Payment can be made by PayPal or Venmo.

At Coach’s Night the ultimate Aggie grill was on display.  Chaz Hammonds ’13 with Soul Fit Grill has created a maroon kamado grill.  As someone who has one of the big name kamado grills I can tell you this thing is on par quality wise.  It’s comparable in size to the XL size of the big name brand for much less.  For $899 you get the grill, side boards, and stand.  If you’re in Houston he’ll even deliver for free.  If you’re in the market for a kamado grill give Chaz a look.  You won’t be disappointed.

He also has a smaller grill if you’re looking for a smaller one: