As college football becomes bigger and bigger key elements are becoming more and more known.  One of the biggest factors in modern college football is how important the offensive and defensive coordinators are.  The reality is coordinators have always been a big thing but 20 years ago most people didn’t care or realize how important they were to a program.  It’s a little different today.

A look back in history can show just how important a coordinator was to a head coach’s success.  Gary Patterson probably had more to do with Dennis Franchione’s “success” than Dennis Franchione himself.  It’s no coincidence that Mack Brown’s only two B12 titles and national championship game appearances came with Will Muschamp and Gene Chizik as his defensive coordinators.  Speaking of Chizik, in six seasons as a head coach he had three winning seasons.  All three of those were when Gus Malzahn was running his offense.  Throw in Cam Newton with Gus Malzahn and Chizik wins a national championship.  Not sure how much Chizik himself had to do with winning it all.

Venables was in Norman for the start of the Bob Stoops era in 1999.  Not to steer from Venables but most people don’t realize Mike Leach was Stoops first Offensive Coordinator at OU.  Stoops was the DC at Florida while Leach was the OC at Kentucky prior to Stoops getting the OU job and hiring Leach.  They had gone head to head for two seasons so they were familiar with each other.  Leach would serve as OC for one year before getting the head job at Tech.  Just a bit of trivia for you.

Back to Venables – Venables served as co-defensive coordinator with Bob’s brother Mark from 1999 to 2003.  Mark Stoops was listed as the Defensive Coordinator and Venables with the “co” title.  In speaking with Oklahoma fans over the years the arrangement was basically that Mark Stoops got the players fired up and Venables handled the Xs and Os of the game plan each week.  It worked well as Oklahoma was really successful during that era.  They played in two national championship games winning one while also winning a Rose Bowl game as well.  This period is when Bob Stoops got the moniker, “Big Game Bob.”

Starting in 2004, Brent Venables took over the sole responsibility for the Oklahoma defense after brother Mike took the head job at Arizona.  Venables would hold this spot through 2011.  At the end of the 2011 season Venables decided to leave Oklahoma for Clemson.  According to Venables, he decided he needed to do something different.  Bob Stoops was bringing back his brother Mark to help with the Oklahoma defense.  Venables claims that wasn’t a factor and he just wanted to try something else.  Dabo Swinney gave Venables the hard sell that Venables was what Clemson was missing.

Whatever that reason was, Venables took the job and helped ensure a different path for each program from a defensive standpoint.   I went back and looked at the total defensive rankings for each time in the period Venables was at Oklahoma and Clemson.  I took these rankings from www.sports-reference.com.  It lists the season stats for each team and ranks them.  I’m sure there’s other sites that may rank total defense a little differently but for this exercise I felt these rankings listed would give a good idea on how these defenses fared with and without Brent Venables.

Dabo Swinney took over the Clemson program halfway through the 2008 season.  2009 was his first full season.  If you go back and look at the season records for Clemson from 2004 to 2011 they’re pretty similar.  They generally won around 8 games a year during that period.  I feel comfortable comparing Clemson during that period with Oklahoma as the there’s not a dramatic difference between Tommy Bowden and Dabo Swinney during that span of time.

Here’s the data in table and graphed: 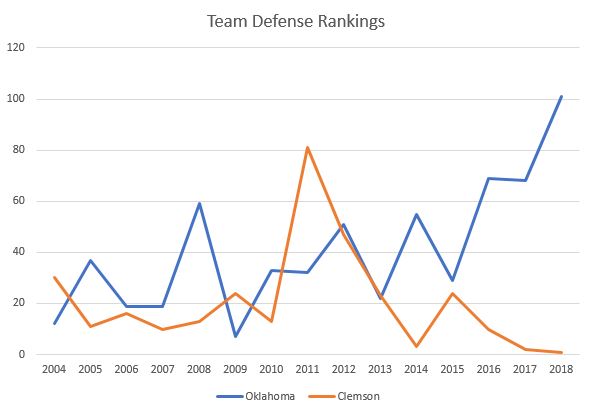 As you can see during the period that Venables was at Oklahoma the Sooner and Tiger defenses weren’t terribly far apart for the most part.  There were some hiccups for each team in a couple of seasons and the Clemson defense was generally ranked higher but they were both pretty solid defenses in the grand scheme.

In Venables first three seasons he made SERIOUS progress with Clemson’s defense taking it from the 81st ranking in 2011 to the 3rd ranking in 2014.  That’s the year Clemson DESTROYED Oklahoma 40-6 in the Russell Athletic Bowl.  The 2015 Clemson defense took a slight step back falling to the 24th overall ranking but Venables took on Oklahoma again in the first round of the CFP holding Baker Mayfield and Oklahoma’s offense to 17 points.

In 2016 the Clemson defense held a Top 10 ranking.  That’s the season Clemson won its first national title.  Making things more impressive for that season is Clemson completely shut out Ohio State in the first round of the CFP.  Clemson destroyed Ohio State 31-0 before beating Alabama for the title.

In 2017 and 2018 Venables would have his best seasons yet from a statistical standpoint ranking in the top 2 each season.  In 2018 Clemson would add it’s second national title beating Notre Dame and Alabama in the CFP.  They held Notre Dame to 3 points and held Alabama to 16 points.  That was Alabama’s lowest point total all season.  Alabama hadn’t been held under 20 points all season and had only been held under 30 points two other times.

Needless to say, Venables made his mark on the Clemson defense and the team as a whole in his 7 seasons at Clemson.  Clemson likely doesn’t see the same level of success without the hire of Brent Venables.  No doubt Dabo Swinney can recruit but Venables knows how to coach.

Meanwhile in Norman, brother Mark is back coordinating Bob Stoops’ defense and things look completely different.  In Mark’s first season the Sooner overall defense rank jumped from 32 in 2011 when Venables left to 51 in 2012.  They would have some decent defenses in 2013 and 2015 but outside of those seasons the Oklahoma defense wouldn’t be ranked in the Top 50.  In seven seasons since Venables left the Oklahoma defense has been ranked outside the Top 50 in five of those seasons.  In 2018 they fell to a jaw dropping rank of 101.  That’s 100 spots away from where Venables’ Clemson defense ranked in the same season.

Along with those rankings there’s some pretty bad bowl losses as OU got blown out by Texas A&M in 2012 and Clemson in 2014.  They’ve also failed to win a CFP semi-final game in three tries.  They have a couple nice wins over Alabama and Auburn in the Sugar Bowl but overall their bowl record has not been impressive since Venables left.  That’s 2-5 in bowl games since Venable’s departure.

Some people might argue the rankings are skewed because the B12 conference is an offense focused conference.  Defenses are going to give up yards and points because the B12 offenses are so advanced.  I think there’s certainly some merit to that argument.  There’s no doubt B12 offenses for the most part focus more on putting up yards and points and really hope to just win in a shootout.  Defense is an afterthought.

To try and balance this argument I looked at Oklahoma and Clemson’s out of conference record against Power 5 schools.  I wanted to see if there’s any major difference in the wins and losses for those games with and without Venables.

This isn’t a perfect exercise as prior to 2012 the Power 5 conferences didn’t exist.  The Big East was considered a decent football conference so I counted that conference as a “P5” similar conference.  In addition, teams from P5 conferences can vary in talent but I feel it’s a reasonable comparison to check out of conference success.

Venables time at OU and after OU isn’t terribly different at 10-6 with him and 7-7 without.  It’s much closer than you think if you count losses against TCU, Boise St, and BYU during Venables time at OU.  Those were legit football teams at the time OU played them.  That would take it to 10-9.  During the time without Venables there’s a loss against UH that could take that record to 7-8.  Either way, you can argue Venables departure hasn’t meant much for OU’s out of conference record.

Since Venables arrival, Clemson has gone 18-5 in non-conference P5 games.  You can gripe about the ACC not being competitive but when you win 82% of the games outside your conference that’s damn impressive.  Two of those losses are to Alabama.  Needless to say, Clemson is competing at an elite level with Venables as their defensive coordinator.  Two national titles help prove that but 18-5 shows it wasn’t a couple flukes.

I’m not saying Oklahoma wins a national title with Venables still at coordinator.  That’s impossible to say as there are too many variables to make that comment.  I do think it’s safe to say Venables is a BIG reason Clemson has two national titles.  Dabo Swinney is an outstanding head coach.  However, without his hire of Brent Venables in 2011 I think it’s safe to assume Dabo wouldn’t be talked about as the heir to Nick Saban as the best in college football.

Next time you see a coordinator getting a big contract there’s a reason for it.