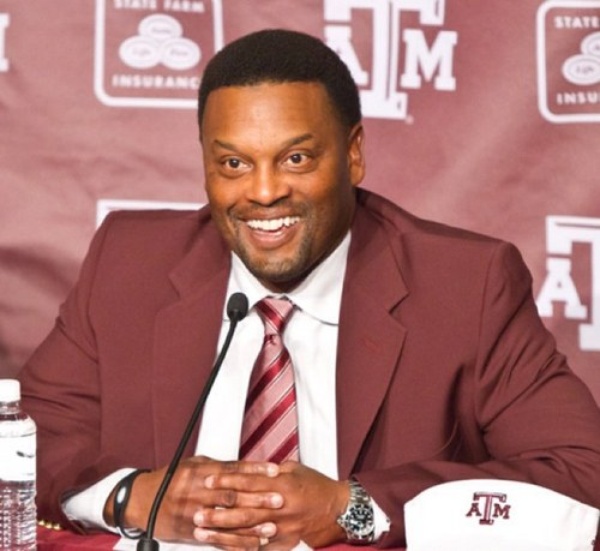 As we draw near to the end of the Sumlin era let’s look at how things got to where they are.  Over the next week or so there will be lots of narratives and agendas being pushed by various people in the local and national media.  Some will do it because of existing relationships with Sumlin, some will do it because of their perception of A&M, and some will do it just to draw attention in hopes of propelling their name.  Nobody will really be taking an objective look at how things got here because when you look at things objectively it’s actually pretty boring.  People like drama which propels attention so narratives and agendas will be pursued.

Before moving forward let’s address a potential elephant in the room.  The racist note the Sumlin family received after the UCLA game.  Some will want to use that as an example Sumlin was mis-treated and A&M is a racist school.  None of that is true.  Not one Aggie I’ve spoken with in private has any response other than they can’t believe someone sent that.  It’s not reflective of the A&M fan base at all.  That note was sent by a rogue Aggie “fan.”  Based on the writing and return address it’s likely an old white lady with some money.  The reality of her situation is she probably has more time and money than most and hits the wine too much.  In addition, her husband is probably tired of her nagging him and doesn’t talk to her anymore just like her kids.  He’d divorce her but it would cost too much so he just ignores her which means she needs an outlet to get attention.  One night the week after the UCLA game she had a little too much wine and wrote the Sumlin’s a note using the only address she knew that wasn’t her home.  She’s a pathetic human being and not reflective of the Aggie fan base at all.  If someone wants to use that to paint the entire Aggie fan base they’re just as pathetic with a feeble brain that can’t apply logic to a situation and also pushing an agenda.  It’s a terrible thing that happened but it means nothing the grand scheme if you have half a brain.

Dismiss anyone that wants to bring up that issue as a factor in anything related to Sumlin.  In fact, send them to this link which proves it’s a non-story as it pertains to the A&M fan base as a whole.  Mrs. Sumlin makes it pretty clear she sees it as a poor pathetic person acting as an individual and not a representative of the fan base – https://twitter.com/courshel/status/906988595696820224/photo/1

Another item to think about with people with an agenda against A&M is how the Sumlin situation was handled this week.  A&M is no different than any other major program.  Think about LSU two years ago.  Think about Texas last year when it was made aware Charlie Strong would not survive his last game against TCU no matter the outcome after three seasons in Austin.  Any Longhorn fans that talks trash about A&M in this situation just ask them about how Charlie Strong was handled.  It likely won’t shut them up because a lot of them are morons but it might.  It was handled almost the same way heading into the last game.  Think about Florida earlier this year when reports surfaced that McElwain’s agent had met with the Florida administration on a buyout.  The Florida AD denied that report and two days later fired McElwain.

Hell, think about how firings are handled in your workplace.  Sometimes they’re known before they happen as well.  I’m not saying people don’t deserve better but to say the Sumlin situation has been handled this week is different than how MULTIPLE other situations have is foolish.  Do I wish A&M could have handled it differently?  Sure.  Is it possible to handle it differently?  Based on other programs in similar situations it sure doesn’t seem like it.  You never know who is leaking this stuff as it could be the coach’s agent to get the word out there his coach is available.  Terminating an employee is rarely clean and quick no matter the level or industry.  Kevin Sumlin was not treated any differently than countless other coaches.  At least he’s not getting fired on the tarmac after landing from a road loss.  Coaches also leave on their own in less than desirable circumstances.  Sadly it’s the nature of the beast in the industry.  Don’t let anyone act like A&M is any worse than anyone else.

What I think is interesting about these changes is that it’s really a life lesson for the players.  At some point in their professional career someone they report to will move on which will change their professional outlook.  They also might be moved intercompany and have to report to someone they’ve never reported to before.  At that point an individual can either realize they themselves have more effect on their professional career than anyone else or they can wallow in self-pity they have a different boss they didn’t choose.  Winners go on and win while losers look for blame.  It’s not an easy lesson but believe it or not it can be a beneficial one.  We live in a world where things change.  I do believe a player should have 12 months to transfer to any school without sitting out once a school makes a change at head coach.  That’s my only real issue in changes like this.  Other than that it’s just a reality of life despite what the talking heads say.  They work for companies that lay people off or their bosses leave for greener pastures all the time.  They themselves have all left for greener pastures at some point but they fail to mention that when they become holier than thou in a coaching change.  It’s not perfect and never will be perfect.  It’s called life.

With that out of the way let’s talk about what Kevin Sumlin was given during his tenure at Texas A&M:

Now let’s list out what Kevin Sumlin didn’t do:

Let’s talk about some of the things Kevin Sumlin did do:

When you look at the ledger of what Kevin Sumlin was given, what he didn’t do, and what he did do as coach at Texas A&M it’s hard to say he was treated unfairly by Texas A&M.  He was given everything he asked for over six seasons but yet failed to finish in the Top 25 despite being paid as a Top 5-7 coach.  He was compensated way higher than what he delivered over the last four seasons.  It’s not a knock on him personally but it is a knock on him as a head coach.  He simply didn’t deliver to the expectations that were placed on him and Texas A&M has decided to move on.  Those in charge of Texas A&M feel that Aggie Football is capable of achieving better results than what Kevin Sumlin has and will likely deliver.  It’s nothing personal as a clear pattern of mediocre football has been established under Sumlin’s final five seasons.  It’s a business.  Sumlin knows this better than anyone.  Win enough or else.

Going back to how things were handled this week there are reports Sumlin was made aware of the decision prior to the public report by Brent Zwerneman in the Houston Chronicle.  If Sumlin failed to inform his staff that’s on him as he could have given them a heads up to start putting feelers out for other jobs.  I’m sure Sumlin’s agent has already got a jump on things reaching out to athletic directors that might be interested in hiring Sumlin.  I don’t think Sumlin has been sitting on his hands waiting for the official public announcement from Texas A&M.  I doubt his assistants have been sitting on their hands as well despite the article by Bruce Feldman claiming an assistant first hear about it when the Chronicle published Zwerneman’s story.  I’d wager every one of Sumlin’s assistants has put some kind of feeler out for employment next year.  Employee departures are never easy and clean.  Welcome to this thing called life.

Despite all of the noise what’s going to happen is there to be a change in head coach at Texas A&M in the next couple of weeks.  A month from now everyone will have moved on from this week’s news of how Kevin Sumlin, his staff, and the players were claimed to be “treated unfairly” by a few people with an agenda or need for attention.  At worst if Sumlin, staff, and players found out via the Chronicle story at least he wasn’t in the driveway of a recruit like Mike Sherman.  There have been worse coaching termination notifications and there will be worse.  It’s never a clean move despite what the “experts” say.  It’s all part of the business.  Kevin Sumlin will likely have a new head coaching job in a month from now if he really wants one.  He’s a fine coach but he’s just not a great coach as the last five years at A&M have shown.  Maybe this is the wake-up call he needs to finally make changes to his coaching style.  Either way a year from now all of this will mostly be forgotten just like Charlie Strong and Texas last season and countless other coaching changes over the years.  This is no different.

It looks like Jimbo Fisher could be the new guy which I’m fully on board with.  It’s a MAJOR statement hire by Texas A&M and likely the most sure thing out there.  It won’t be cheap but it could absolutely be worth it.  A&M made a bold move to the SEC which woke some people up but hasn’t woken everyone up.  Some people still don’t have an objective opinion of Texas A&M Football.  The hire of Jimbo Fisher will continue to wake people up that Texas A&M has the ability and desire to compete with the top programs in the country.  It’s all about coaching and A&M is making a move to see if they can find the right coach to Make Aggie Football Great Again like it was from 1985 to 1995.  No more and no less despite what someone may want to portray it as.

Feel free to share this with friends on social media and message boards as well!